Skip to content
For around thirty-five years I have been somewhere trundling along what Gurdjieff & Ouspensky called The Fourth Way. Since whenever it learns something for itself it there’s an ‘I’ that inevitably tries to figure out a way of teaching whatever it might be (Being-a-teacher-I), it has taken Fourth Way concepts and made them into practical exercises in Enneagram Studies, in NLP-related courses, in Life Coaching and in creative pursuits. In doing this Being-a-teacher-I has always followed Gurdjieff’s principle that  NOTHING SHOULD BE PRESENTED IN A READY-MADE FORM
Anything that is presented as cut & dried, too neatly and tidily, prevents true seekers from being determined to make sense of things for themselves. Obviously, there is an optimum…
So what are the other three ways? The 1st Way is that of the Fakir who goes apart from the world to find enlightenment via physical excesses; the 2nd Way is that of the Monk who retreats to a monastery to adopt an emotional approach to reality; the 3rd Way is the Yogi’s way which is to meditate in a darkened room in order to sort things out on an intellectual basis. The 4th Waycombines these three approaches but crucially depends not on withdrawal from the world but on self-study during the process of everyday life, going about one’s normal routines.

There was a time when Reducing-things-to-order-I had every intention of writing a book systematising my understanding, such as it was, of The Fourth Way—a kind of Gurdjieff & Ouspensky Made Easy (God forbid!). Indeed, my notes for this project still exist in a computer file called ‘TMBSMTLTT’—There Must Be Something More to Life Than This (Ouspensky)—which was to have been the title of my book. Then I began to take very seriously JGBennett’s dictum Anything too well organised sows the seeds of its own destruction… Any dumbing down in whatever context does this. Seekers must be prepared to Work for Understanding, which may be defined as the product of Knowledge tested on the anvil of Being—the KUB model, as I call it. 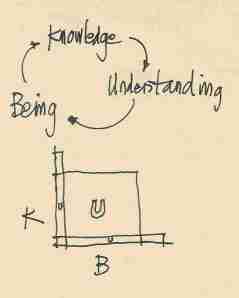 Somebody with huge Knowledge but not a lot of practical Being has a slim amount of Understanding; likewise a person with much meditative & saintly Being but not much Knowledge of the ways of the world has a flattened out Understanding; those who combine Knowledge and thoughtful Being are likely to possess an expanded version of Understanding…

Without thinking about it too much, I hit upon a light-hearted solution. In a continuing attempt to come to terms with the huge sprawling fragmentary unsystem known as ‘The Fourth Way’ I embarked on what’s turned into a series of books called  ‘ROOM’. Rooms One Two Three Four and Five are already published by Hub Editions (£7 including postage in UK). Each book, or philosophical farrago, consists of romps around my library with frequent visits to my versions of the writings of Mr G & Mr O, as Maurice Nicoll used to call Gurdjieff & Ouspensky, relating their ideas to world events, literature and philosophy in general. Maurice Nicoll’s compendious Commentaries (gold-mine of suggestions for practical exploration) are also often referred to.

The 4th Way and NLP

I qualified as a Master Practitioner of NLP in 1993. As I became more and more familiar with the art & science of NLP I began to realise that much of the underpinning concepts were familiar to me from other contexts I had studied.

It struck me that, back in the 1920’s & 30’s, Gurdjieff, Ouspensky, Nicoll, & Bennett were already developing techniques that could now be classified as being within the eclectic way of working known as NLP.

When practitioners of NLP find an example of a person performing with a degree of ‘excellence’ in some way they are trained to ‘model’ on specific factors that make for excellence in a person’s behaviour—long ago Mr G had advised groups to make a record of their lives for modelling purposes.

When successful NLP practitioners work with other people they use ‘Artful Vagueness’ to encourage learners to make sense of things for themselves—Ouspensky noted that Mr G resisted sharing everything and G himself noted:  ‘…I had become more adroit in the art of concealing serious thoughts in an enticing, easily grasped, outer form…’ (Meetings with Remarkable Men p7) Bennett stresses that the development of ‘meaning’ requires consistent efforts of ‘Progressive Approximation’.

Expert NLP practitioners work hard to conceal the fact that they seek to establish rapport with those they work with by, for instance, picking up the words, phrases and images they use and feeding them into subtly back so that there’s joint  recognition of a coming together. This enables the practitioner to pace the seeker’s state of being (manifested in the words they use) and to lead them into a different one. Ouspensky realised that G’s voice intonation changed subtly when he was attempting to explain those things and this enabled him to detect similar voice intonations in others. (In Search of the Miraculous p248) Talking to Mr G, O felt ‘as though he were deliberately trying from time to time to throw me a word that would interest me and make me think in a definite direction…’ ISOTM p16. These are simple examples of establishing rapport and pacing and leading.

Many exercises in NLP rely upon the presupposition that there are different parts of our being that we can go to to establish a different point of view: likewise in the 4th Way discipline we learn, for instance, to step deliberately between Intellectual, Emotional and Moving Centres, to ‘move the brain at least once a day’, as Mr G says, into a different way of being instead of just being stuck in the Centre that’s habitual and comfortable for us. This also illustrates the NLP fundamental concept

In Gurdjieff’s ballet The Struggle of the Magicians, ‘…the same performers would have to act and dance in the ‘White Magician’ scene and in the ‘Black Magician’ scene;… they themselves and their movements had to be attractive and beautiful in the first scene and ugly and discordant in the second…; … in this way they will see and study all sides of themselves…’ In the NLP process known as meta-mirror, you learn to identify and disidentify with another person by deliberately moving from 1st to 2nd Position and then into Observer-I and Decision-making-I (3rd & 4th Positions) (In Search of the Miraculous p17)

The fundamental discipline in 4th Way studies is to learn to remember yourself, to enter into real consciousness rather than fester in the sham activity that we call ‘consciousness’ which we kid ourselves that we’re in during so-called waking life. G: ‘When you really remember yourself you understand that others are machines just like you are. And you will enter into their position, you will put yourself in their place (External Considering) and be able to understand and feel what others think and feel… Approach somebody else with your requirements and nothing except new internal considering [mind-reading] can ever be obtained…’ (In Search of the Miraculous p153)

The 4th Way with Accelerated Learning

Towards the end of his life, J.G.Bennett who was valued by Mr G as a person who would carry on his work, had it in mind to think up ways of accelerating the learning of the 4th Way System. Under the general banner of Accelerated Learning, I have devised exercises that have the effect of getting people quickly into the discipline of the Pendulum as a way of reconciling negative & positive, of getting to Essence by blasting through the things of the personality. Gurdjieff’s idea of Multiple-I’s is now a simple and profound tool for Life Coaching and self-analysis.

The 4th Way and Found Poems

One way that I have found useful to keep myself on the track of the 4th Way is to construct Found Poems from the writings of others on the journey, especially from the huge Commentaries of Maurice Nicoll.

I ask you again as so often

have you noticed yourself making up
stories in a wild attempt to fix
the forever flexible nature of things?
have you been full of self-pity?
have you been gloomy and depressed
and useless to others?
have you spoken things mechanically
when you might have said things
more consciously?

has the day defeated you
or have you defeated the day?
have you leaked Force
or built up your energy-stock?
have you gone to the day
or has the day succeeded
in frog-marching you to it?

In another corner of my e-world, somebody asked why people ‘blog’. Questions are always useful!

I thought for a bit and then posted:-

The great advantage of creating a space where you can safely post stuff that suits you is, for me, about having somewhere as a neat repository for regular pieces of organised writing. Thus, in colinblundell.wordpress.com, I have a growing number of different sections that reflect separate but inevitably connected bits of my being. There is a weekly slot for practical/philosophical ramblings – anything up to 10,000 words. And slots for poems and haiku. And so on. I have made a self-commitment to doing this, knowing that when I have been going some time, I will automatically have material for another book of ramblings, another book of poetry, another book of haiku and so on – the words mount up. I self-publish. I hand-make paperback books but I don’t advertise this much because I don’t want to be inundated.

I’ve been going with WordPress since September 2011. Previously I did not have this sense of regular commitment – things were all over the place, difficult to keep track of – but now I feel it like one of those icing bags my mother used but I squeeze out words instead of icing.

I’ve also merged a Website into the WordPress site – one which I can manage myself. The old one brought me around six pieces of work in ten years and I had to pay for a manager! I do not expect this one to be much different but it satisfies me to have everything in one place. It gives me a sense of order!

Whether the world notices my ‘expertise’ is of not much consequence to me. I have all the work I need through networking. I can see that with 50 million + people doing blogs nobody much is going to notice me. A hundred people are supposed to be ‘following’ me but I don’t get a sense of people milling around behind me. There is now just too much ‘stuff’ on the Internet for anybody to make sense of much of it unless it somehow hooks them. But there are 3 people to my knowledge who follow me with some enthusiasm – that’s good enough for me…

So,  for me, it’s offering a sense of order. If others care to comment on things I write, that’s great.

For me, it’s not much of a marketing tool. I don’t have any frustrations to vent anywhere, and 99.999% of the world is totally indifferent to my expertise such as it is.

I hope this might just answer the question somewhat! It’s great for providing a sense of personal order and commitment.

22 thoughts on “My Philosophy”