I’ve just finished reading JBPriestley’s book of small essays published in 1951 called Delight. It is truly full of delight. In her biography of JBP, Dulcie Gray wrote: ‘…Priestley was lucky to be writing at a time when essays were popular – he was one of the last great essayists…’ I was lucky enough to have been attending Kingston Grammar School at the same time when it was a requirement to write a weekly English essay. My models were Elia, Robert Lynd, Hilaire Belloc, Richard Jefferies, George Bourne and others… (See https://colinblundell.com/2020/06/19/plaguetime-8/)

I never met CJHolmes. He was not a great artist, perhaps not even a considerable one. Yet few painters of this or any other age have given me more lasting delight than Holmes. The reason is that he did successfully what I have always wanted to do, have tried to do, and have grotesquely failed to do. For what he did was to slap down on paper any bit of landscape that took his eye. The medium did not matter – he would use pencil, ink, chalk, pastel, water-colour, and if necessary mix them all up – but what he saw and enjoyed, mostly on holiday, I imagine, he recorded with speed and precision, catching a moment and holding it forever. Anything would do, Lake District mountains, Oxfordshire streams and willows, haystacks or factories (I have examples of all these and of other things too), but clearly he had to feel happy and, excited about what he saw and then get the thing down on paper as soon as possible. And I would not exchange these sketches for whole academies of laborious studio work. I have been surrounded for years by specimens of this happy holiday art of his, and I never look at them properly (for often we look without truly seeing) without a lift of the spirit. “This is what I saw that morning and this is what I felt about it,” he shouts from the [red] wall; and I give him an answering nod and grin. When he left London with a bag full of pencils, inks, chalks, pastels, water-colours and paper to mooch about and have some fun, he was already on his way towards lighting up the existence of somebody he never knew. If I could do the job myself, then down would come the Holmeses and up would go the Priestleys; but I can’t – and I know because I have tried. But, thanks to his sharp eye and quick clever hand, he has made me share his experience, rented me for a few guineas many a morning’s happiness. Is this art? I no longer know nor care (I took a postgraduate course on Aesthetics), but it is delight and good enough for me.

I had never heard of CJHolmes before reading this; he died the year before I was born! Why did Priestley’s little essay appeal to me? Because he has attributed to CJHolmes the very methods I use myself when executing coloured designs on paper, more often than not done in watercolour with pen or pencil but not excluding anything else that makes a mark. I ‘…slap down on paper any bit of landscape’ that takes my eye, without in the least looking for something that might be paintworthy – just something that happens to be in my line of sight; I allow around five to ten minutes a painting, an instant of expression with the same cognitive impulse that strikes me when I make a haiku – the equivalent, as I suppose, of an English version of sumi-e. I don’t know whether Priestley knew that Holmes introduced Japanese art to Britain, writing about Hokusai and Hiroshige. He had travelled to Japan in 1889 and would almost certainly have come across the sumi-e process. Anyway, Priestley’s words glitter in my brain: I too record ‘with speed and precision, catching a moment and holding it forever. Anything [will] do…’ Priestley calls this ‘happy holiday art’ – it has always been that for me! I never look back at my sketchbooks ‘…without a lift of the spirit. “This is what I saw that morning and this is what I felt about it,”…’ I shout to myself without in the least thinking I ought not to.

So, in turn, by writing about CJHolmes, JBPriestley ‘…lights up the existence of somebody he never knew…’ – I give him the same ‘answering nod and grin!’

He wonders: ‘Is this art?’ and decides to ‘…no longer know nor care…’ It strikes me that the ‘postgraduate course on Aesthetics’ he says he took might well have been the sticking point generating his belief that he could not do a Holmes for himself, could not paint in the way that he so delightfully describes the way he supposed Holmes worked. One must not try to emulate another unless the urge and grasp comes from within yourself.

I’ve now learned that Holmes was Director of the National Portrait Gallery in 1909 and The National Gallery in 1916 and exhibited at the Venice Biennale between 1912 and 1930. He became a member of the Royal Society of Painters in Watercolours in 1929, vice-president in 1935. But he never attended art school – I know what that feels like – another DIY man from the sound of it. What he wrote in 1909 appeals to me as a way of working: ‘…just as the poet sums up his experience in terms of rhythm so the true painter’s emotion visualises and embodies his experience in terms of design. It seizes on the points of the subject that are essential to pictorial expression, and rejects all others’. Holmes saw an abstract sublimity in the industrial landscape with which he was familiar from childhood.

In fact, in his novels, Priestley often seems, like Holmes, to ‘slap down’ not paintings but a thought-stream of separate images. Perhaps he only imagined he knew how Holmes worked seeing in him the ‘slapping things down’ he already had in himself without realising that he could easily have transferred the process to making paintings. He was on the edge of something in his essay. He says he would have taken down the Holmeses from his wall and substituted Priestleys – very modest! He could certainly have put his up as well… 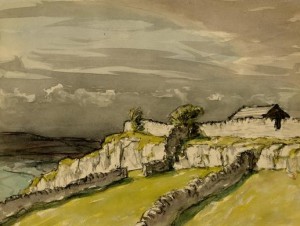 A couple of Priestley Paintings:- 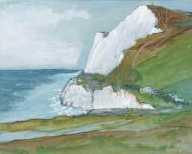 And four of my own slap-happy five-minute watercolours:- 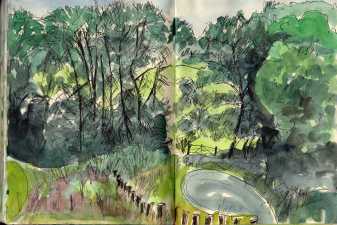 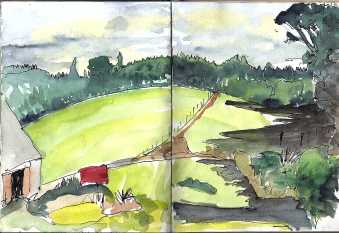