In September 1994 I went to Romania to attend an International Haiku Conference. It was a very memorable time.

The highlight for me was a performance of two of my musical settings of haiku by David Cobb and James Kirkup. Here’s a link that will summon up sight and sound of the occasion.

When we went to Romania I had assumed that the performers would have been hard at work rehearsing already but I think they’d only just got the music when we arrived. There seemed also to have been some dispute with their opera company over who should get the $100 I was paying for hiring them… It turned out that $100 represented a teacher’s salary for one month then

The Russian soprano could speak neither English nor Romanian so after some discussion we settled on her doing a vocalisation of the song-line. The other performers had little or no English and I can’t do Romanian but miraculously we communicated through the music itself. This did pose a bit of a problem since as I understood it the performers were used to playing light opera. So the cellist had to accommodate the idea of banging with his hand on the wood of his instrument!

In my old notebook I find the names of the performers:-

I celebrate their professionalism and the brilliant way they played my music. I mark the occasion as one of the great highlights of my life! I wonder if they remember it!

On an adjacent page in my notebook I find this little haibun:-

Carefully crafted deference paraded by one who knew a famous man thirty years ago who wrote a book thirty years before that and in his breakfast table self seems just like a walking version of that book, the thing itself just as it is now in its Suchness. The book, that particular thing, is his script for everyday life; even the cup of coffee and the bread evoke a part of the script. He interpenetrates the book, that old passé in the ancient moment of what seems like his only moment thirty years ago. He interpenetrates his black shirt, the dark glasses, the fading throat, the deliberately slow diction for the sake of the foreigners. So interpenetrated is he with things in themselves that his own self has completely disappeared; in every ordinary conversation he waits for the opportunity to quote from the one moment thirty years ago. In the set-piece delivery of transcendental Truth he joins himself in ecstasy to the moment thirty years ago.

Where was it? How were the trees in the forest?  The sky, the clouds, the moving insects? How did he become these things? How first become them? How did he lose his being? Why did he not leave a length of string tied to the Here & Now with which to find his way out into this moment at the breakfast table, leaving all the turbulent clatter of the past far behind?

the sound of his voice
its huskiness already
contains the applause

I do not remember this breakfast but the word ‘interpenetrates’ tells me who it was: the word signified his one and only contribution to haiku-theory and he was the man behind the camera when my music was played. I wish to celebrate him as well.

My musical expression has moved on a bit since those days.

After the haiku conference, brilliantly organised by Ion Codrescu, we were treated to a ride round Romania, including a visit to ‘Dracula’s Castle’:- 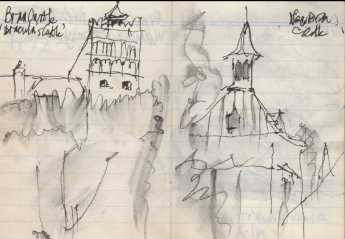 in the Transylvanian Alps:- 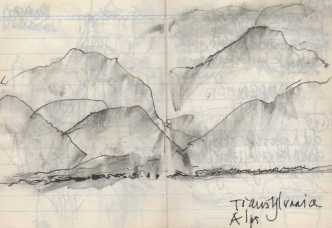 and then some old royal residence obscenely upholstered:-

We wound up in Bucharest where we saw the bullet holes in the walls of old buildings when Thatcher’s friend Ceaucescu was eliminated, his icing-cake palace and the medieval conditions behind the façade. But we stayed in a posh hotel; this was the view from high up:- 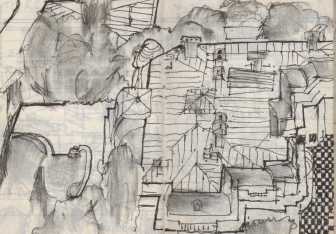