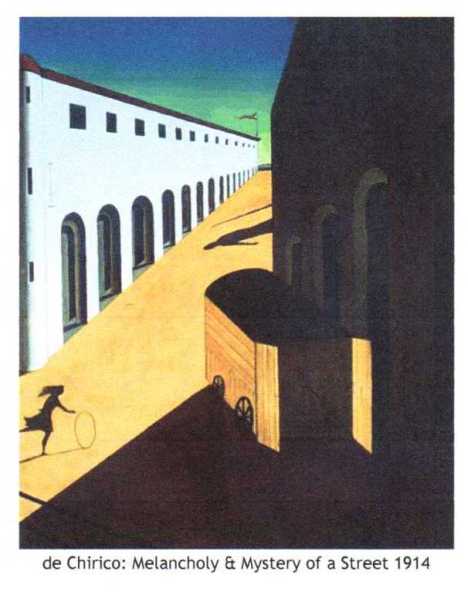 I wake up these days with the thought running through my brain cells: ‘It’s Plague Time!’ – won’t be going anywhere today except round & round the garden and the forest of my mind.

But usually something more esoteric and lastingly binding takes over: today, for example, I remember that yesterday evening I set myself to make a permanent note of a quotation from JBPriestley’s remarkable & haunting novel Bright Day first thing in the morning:-

One mistake we’re apt to make, though, is to assume that we are just ourselves as we are now, whereas that’s only the thin top slice of us. And whatever has happened to us in the past is still there, perhaps still working away at us…

Thus the thought ‘It’s Plague Time!’ becomes swallowed up by the enthusiasm of the intellectual chase. Though I might also be wondering if our strange tabby cat has been in for his midnight feast, everything that follows has been working away at me for years! It’s just like Tennyson wrote in his long poem Ulysses:-

I am a part of all that I have met;
Yet all experience is an arch wherethro’
Gleams that untravell’d world whose margin fades
For ever and forever when I move.

And then, after making that connection, since things seem separate while in fact everything is connected (for which thought I am of course indebted to PDOuspensky) I remember that my grand-daughter asked me yesterday if I think Giorgio de Chirico was a Surrealist; in the middle of the night, grasping perhaps at the prior idea of ‘the real’ which was haunting me, I had got up to scribble

on a small piece of paper in the expectation/hope that it might help me construct a sensible kind of answer for Rosie.

Then, by the randomness of chance, I remembered that Professor Joad would have said ‘it all depends on what you mean by Surrealist…’

The word was apparently first used by Guillaume Apollinaire in a play written in 1903 and performed in 1917 but André Breton in the Surrealist Manifesto (1924) defined surrealism as:

…pure psychic automatism, by which one proposes to express, either verbally, in writing, or by any other manner, the real functioning of thought. Dictation of thought in the absence of all control exercised by reason, outside of all aesthetic and moral preoccupation…

There we have it: ‘the real functioning of thought’ – stream of consciousness, associations between one brain cell and another unsullied by the intervention of invented human categories, uncontrolled by any kind of pre-existing packaging – aesthetic or moral, political or religious, intellectual or emotional, snakes & ladders or ludo… ‘pure psychic automatism’…

Guillaume Apollinaire also called de Chirico a ‘Metaphysical’ painter: if we take the word metaphysical to mean ‘beyond mortally physical appearances’ that would fit with something de Chirico wrote:-

To become truly immortal, a work of art must escape all human limits: logic and common sense will only interfere. But once these barriers are broken, it will enter the realms of childhood visions and dreams.

If I had been Guillaume Apollinaire, with a penchant for labelling things and knowing what I know now, I would have called surrealism META-REALISM since its many manifestations simply go beyond or above the ‘real’. And I would not have pinned a different label on de Chirico.

The Greek prefix μετα is a very useful way of referring to something as meaning ‘after’, ‘beyond’, ‘above’, ‘across’, ‘at a higher level than’, ‘encompassing’… ‘Meta-realism’ would therefore signify something like ‘a realm existing on a higher level than what seems like everyday reality’; since everyday reality often feels like a bit of a dream, the surrealists managed to penetrate something beyond or encompassing it to escape all human self-limiting functions – thought, logic, false imagination, arbitrary categorisations.

Though often self-limiting and arbitrary, all philosophy and psychology, could be said to be META to life as it is lived, not necessarily ‘higher’ but certainly ‘beyond’ what they seek to describe…

But perhaps we ought first of all to establish the nature of ‘the real’ and be able to say what’s ‘unreal’. Outside the hedge around my garden, there is currently a Global Plague: it seems completely unreal since outside my window the ‘real’ apple tree is white with blossom, the ‘real’ silver birch is coming into leaf and I know that the ‘real’ lilac which I cannot see from my window elsewhere in the garden, in the dooryard perhaps, is blooming – everything behaving normally for the time of year; on the other hand, there are daily reports of ‘real’ hundreds of people dying across the world and one can learn about a ‘real’ President and a ‘real’ Prime Minister making complete fools of themselves and we can entertain a ‘real thought’ that, when you have an economy that is about to collapse because people are now only buying what they need, you know you have a flawed economy – which leads to the ‘real’ question: why don’t people always buy just what they need? How is it that they have chosen to be conned into buying what they don’t really need at all?

There is a seeming unreality abroad but it’s in fact something that now just can’t help happening: it started with the eating of bats in China or, maybe more likely, it escaped from some biological weapon research establishment run by the Americans. The Plague – I prefer to call it that rather than honour it with some fancy-sounding scientific name which hides its ‘real’ nature – is certainly happening, therefore it’s real – ‘everything happens’, says Gurdjieff. The feeling of ‘unreality’ associated with it comes from the straightforward human inability to encompass mentally all the variables (the who-what-why-when-where-how of it – the 5WH of it) – it just seems a very strange event.

There have been many days of ‘real’ sunshine in a completely blue ‘real’ sky this April (Eliot’s ‘cruellest month’) with a ‘real’ roaring wind all the time – it perhaps seems ‘unreal’, but it is real, if just very unusual, not one that I had ever expected that I might have allowed to dominate what are certainly the last years of my life.

What’s is ‘real’ then? Our senses are constantly bombarded by incoming impressions, all the different shapes, mixtures of colours, multiple sensations, varieties of textures, small movement, symphonies of sound, shades of light & dark – trillions & trillions of minute events all the time from all directions in random order which we seek to categorise neatly; how we manage to bind them all into things we can give names to has been forever a mystery for psychologists, philosophers & neuroscientists; in any case it’s not necessarily useful to pin labels to anything because, paradoxically, though they are intended to aid ‘communication’, they limit possibilities, chop what’s labelled off from the flowing world. Better, as Gurdjieff says, to enjoy the vital Food of Pure Impressions; they are the REAL thing. We can, of course, have ‘real’ thoughts and memories and so on – they exist – but they contaminate the initial purity of incoming impressions. Whereas the Surrealists, so it seems, were able to find magic and strange beauty in the unlabelled unexpected and the uncanny, the disregarded and the unconventional – not by tying things down with the seeming logic of words & all our invented categories.

In that sense they went META to ordinary experience, feeding off the Purity of Impressions, seeking to grasp things at a higher level than apple-picking, completing company accounts, winning at the dog-track, watching the news on TV, playing snakes & ladders, going to the seaside, making money on the Stock Exchange and so on.

Max Ernst suggested that… ‘the role of the painter… is to project that which sees itself in him…’ Thus the creative person transcends ordinary everyday distractions by capturing dream, fantasy and higher reality in a spontaneous, uncluttered right brain kind of way. Max Ernst again: ‘creativity is that marvellous capacity to grasp mutually distinct realities and draw a spark from their juxtaposition…’ – the spark is a vision of the new. 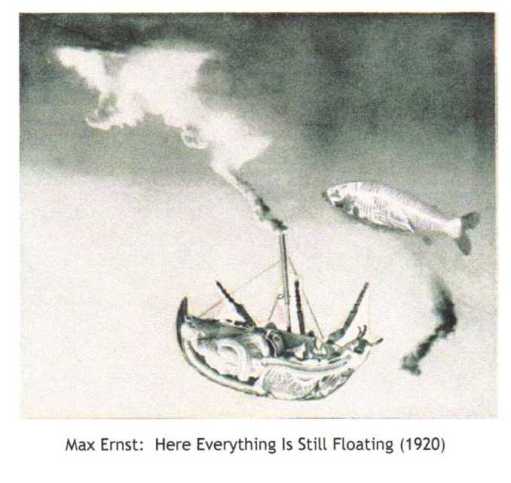 Such a spark is conventionally put down to the workings of something referred to as the ‘Imagination’. We use the unnecessary word without thinking what it does for the very same thinking: it’s an abstraction, a human invention, as divorced from ‘reality’ as any abstraction (‘freedom’, ‘democracy’, ‘love’, ‘time’, ‘justice’, ‘reality’ and so on). It is ‘unreal’, has nothing to do with the way things work in practice. The very existence of the word, ‘Imagination’, itself limits the human capacity to engage in creativity – you hear people saying things like, “I wish I could paint/compose music/write poetry BUT I have no imagination…” Too true they haven’t – there’s no such thing. It’s reified by the existence of the word, given a false existence – all abstractions do that so successfully that human-beings go to war over them.

Arthur Koestler got it right in his The Act of Creation. An artifact arbitrarily labelled the result of ‘imagination’ is an emergent property of very simple act of what he calls ‘bisociation’ – at least two things colliding to create a spark of some kind. 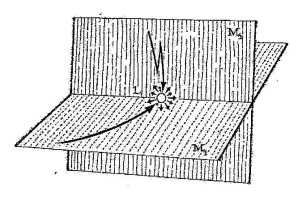 Mummy Tomato and Daddy Tomato are out for a walk while Sonny Tomato is dawdling along behind them (M1 – if you can suspend disbelief for a moment). Daddy Tomato turns round and shouts, “Come on, ketchup!” (M2) – the sauce bottle…). This might lead to (L) the burst of laughter.

The forcing together of disparate images is quite easily achieved by the collage process: a cut-out fish and an upside-down nasty-looking insect stuck on a photo of a sky with the smoke of chemical warfare in it (M1) become objects that appear to be floating about (M2). This also could result in quiet laughter or at least amusement (L) but it certainly makes the viewer see things from a different angle – the created spark or shock.

The invented concept ‘TIME’ is conventionally measured with clocks & watches (M1) but it can be hung out to dry, lost in the space of a landscape or consumed by ants (M2); memory is bent to fit the instant that persists in passing within what we call ‘now’ (L mild amusement, illumination, the shock of understanding that ‘time’ is a meaningless concept…) 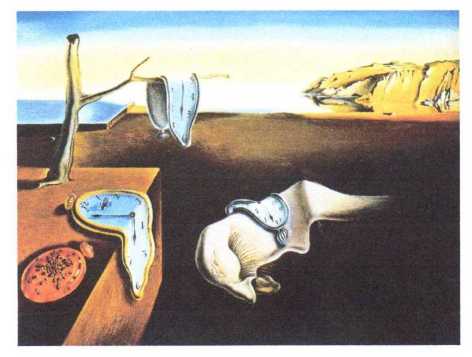 Then there’s Hyperrealism – the excruciatingly painstaking depiction of scenes & people & events in what’s said to be a ‘more than real’ kind of way. More like a craft than a serious painting exercise.

Or you can Google ‘Andrew Wyeth’ who made rather splendid realist paintings sometimes with a touch of Surrealism.

I shall go for a walk around the garden with Walt Whitman and Andrew Marvell – very metaphysical.