Since 1986 I’ve been crafting ‘Found Poems’ from texts while reading them, an active reflection on the text in front of me, a kind of creative note-making. I established this habit at a time when it used to irk me that when I was writing I wasn’t reading and when I was reading I wasn’t writing. I remember wondering how it might be possible to do both together.

Shakespeare did it in reworking Holinshed’s Chronicles into the history plays and Coleridge’s Kubla Khan is a great example of something re-written in a dream-state after a reading of Purchas, his Pilgrimes (1613). William Rice Burroughs, after DADA, popularised ‘cut-ups’; Eliot drew on multiple sources for The Wasteland, finding things and re-using them in creative ways… In art, the objet trouvé is a long-time respectable form.

I pretty soon came to the ritual of writing Found Poems. Since 1986 I’ve written hundreds of them, starting with those culled from the nature essays of Richard Jefferies (Some Spirit Land, Hub Editions 1986) which was followed in 2003 by Found Haiku from Samuel Looker’s Notebooks of Richard Jefferies (Something Beyond the Stars, Hub Editions 2003). Between those years I constructed three or four books consisting entirely of Found Poems from a variety of authors, always diligently noting the source in order to honour it, sometimes rescuing it from complete oblivion. It became an obsession. More recently I’ve fused Found poems into books of my own poems and they have often been more in the nature of Reflections – found texts plus my own thoughts.

I’ve just finished reading Yuval Noah Harari’s brilliant book Sapiens – A Brief History of Humankind. Philosophers are good sources of Found Poetry – the stories they use to illustrate their argument often seem to constitute ‘notes for poems’. Sapiens is philosophical writing in that it causes the reader to re-assess the meaning of life, death and the universe. I feel as though I have distilled much of what I want to retain from the 466 pages by writing the following Found Poems.

This is done in neither the hope nor the expectation of making something out of another person’s labours but as an honest celebration of what they have done and a way of retaining a personal gist of their writing. I hope the author of Sapiens will not be too affronted.

the nobility believed
in both Christianity and chivalry:
a typical nobleman went to church in the morning
& listened to the priest hold forth
on the lives of the saints –
vanity of vanities all is vanity –
riches – lust & honour
are dangerous temptations:
you must follow in Christ’s footsteps –
be meek & mild & turn the other cheek

the baron declared: it is better to die
than to live with shame; if somebody
questions your honour
only blood can wipe out the insult –
what is better in life
than to see your enemies flee before you
their pretty daughters
tremble at your feet?

(Note: Harari seems to think this is OK and ‘fuels culture’. He says that ‘consistency is the playground of the dull mind’ and that ‘cognitive dissonance is … a vital asset…’ Though the latter comment is certainly true, I think he may well be being ironical…)

within a century of Captain Cook’s arrival

having lived for 10,000 years in splendid isolation
they were driven off the richest parts of the island
by European settlers who (coveting
even the remaining wilderness)
hunted them down and killed them systematically

the few survivors were hounded
into an evangelical concentration camp
where well-meaning
but not particularly open-minded missionaries
tried to indoctrinate them
in the ways of the modern world: they were instructed
in reading & writing & Christianity
and all kinds of productive skills
such as sewing clothes & farming

becoming ever more melancholic
they refused to learn;
they stopped having children
lost all interest in life and finally
chose the only route out of the modern world
of science & progress – death

but then science & progress
pursued them even unto the afterlife: the last corpses
were seized in the name of science & progress
by anthropologists and curators; they were dissected
weighed measured, and analysed in learned articles;
skulls and skeletons were put on display
in museums and anthropological collections

only in 1976 did the Tasmanian Museum give up
the skeleton of Truganini (the last native Tasmanian
who had died one hundred years earlier) for burial;
the English Royal College of Surgeons held on
to samples of her skin and hair until 2002

in the good old days

(which they certainly were)
we depended on cycles of natural time
and organic growth quite unable
to make precise time measurements –
not even being very interested
in doing so; we went about our business
without clocks & timetables
subject only to the movement of the sun –
no uniform working day –
routine changing from season to season

in order to survive

any large-scale organisation
(modern state/medieval church/archaic tribe)
has to be rooted in common myths
existing only in the collective imagination:

there are no gods in the universe
outside of people’s minds;
no nations
no money
no human rights
no laws
no justice
outside the common imagination of human beings

that way is possible – a kind of centred sanity…

people have woven
an incredibly complex network of stories
– whole great fictions like those of banks & churches –
social constructs imagined realities
but not lies – I lie when I say: look out!
there’s a dinosaur in the room…

fictions like the Tory Party
Woolworths (remember it?)
Palm Sunday (this very day in 2017)
have a social reality that exerts
immense (if unstable) force

look! this beautiful large-eyed beefly
swooping around in front of me
deck-chaired on a sunlit lawn all afternoon
as though wanting to see what I’m writing

is was once believed

not so! just another fiction
without any evidence that people
have become more intelligent over time:
foragers knew the secrets of nature
long before farming became the norm –
their very survival depended on
an intimate knowledge
of the animals they hunted
and the plants they gathered

and you couldn’t go back –
the change happened over centuries
and people always forget
what it was like in the good old days
like – what did we do before computers?

how do we get people

to believe in shared myths
like Christianity & democracy & capitalism?

after that you educate people thoroughly:
from the moment they are born
you constantly remind them
of the principles of your imagined order
which are incorporated into anything
and everything like a lock in a door
or the way trees sway in the wind –
fairy tales & drama paintings
song & etiquette & political propaganda
architecture & recipes & fashion

I look up at the passing clouds
in the evening sky; there’s a wind
from somewhere & small birds twittering

they all seemed to accept

this theological barny about love
got rather violent: a massacre
on St Bartholomew’s Day 1572
involved the slaughter of
near 10000 protestants in twenty-four hours
as a result of which the Pope
was so overcome with joy
that he organised festive prayers
and got Vasari to commemorate
the massacre with a fresco –
the Vatican room whose walls
are thus decorated is off-limits to visitors 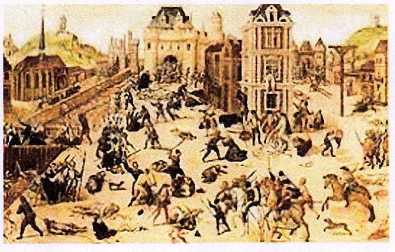 with a modern Parisian banker: the peasant lived
in an unheated mud hut overlooking the local pigsty;
the banker goes home to a splendid penthouse
with all the latest technological gadgets
and a view of the Champs-Elysées

when the 21st Century banker made the last payment
on his wonderful penthouse his neurons secreted
an amount of serotonin bringing it up to
more or less the same optimum level:
it makes no difference to the brain that the penthouse
is far more comfortable than the mud hut;
the only thing that matters is that at present
the level of serotonin is where it is –
the banker could never be one iota happier
than his great-great-great-great-grandfather
the poor medieval peasant

from a purely scientific viewpoint
human life has absolutely no meaning:
humans are the outcome
of blind evolutionary processes
without goal or purpose; our actions
are not part of some divine cosmic plan;
if planet Earth were to blow up at 10am tomorrow
the universe would keep going – business as usual;
human subjectivity would not be missed

any meaning people ascribe to their lives is just a delusion;
other-worldly meanings that medieval people
found in their lives were no more deluded
than those of humanist/nationalist/capitalist meanings now:
the scientist who says her life is meaningful
because she increases the store of human knowledge
the soldier who declares that his life is meaningful
because he fights to defend his homeland
the entrepreneur who finds meaning in building
a new company are no less delusional
than their medieval counterparts who found meaning
in reading scriptures going on a crusade
or building a new cathedral –

perhaps happiness is synchronising one’s personal delusions
with the prevailing collective delusions:
as long as my personal narrative is in line
with the narratives of the people around me
I can convince myself that my life is meaningful
and find happiness in that conviction – perhaps…