We imagine that we consist of one ‘I’ only. All the time we imagine this we are not only kidding ourselves but we are losing the opportunity to re-arrange the way we think about our lives. We are many ‘I’s: Being-miserable-I one day and Being-happy-I the next; Feeling-competent-I one moment and Being-severely-challenged-I the next; every shift of attention we enter into a different ‘I’. Unless we adopt the view that we move from ‘I’ to ‘I’ it can all be very confusing. Wondering-what-to-say-next-I takes over here. Pausing-for-thought-I.

It’s always possible to take a deliberate step away from a Being-stumped-I and stand in a Taking-stock-I. Reading-over-the-previous-paragraph-I. Right!

‘I’s that came from the past have labels or ‘tags’ attached to them; they help us to identify them.

This essay is an attempt to suggest a way of starting to come to terms with Multiple-I’s; it amounts to a personal Case Study; its detailed references will be of little interest to anybody but myself but the structure might suggest a parallel investigation. 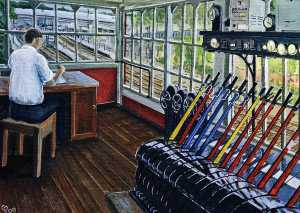 I awoke this morning (19th March 2017) before dawn with the concept of ‘I-tags’ coming in at me from the blackness outside.

The concept of I-tags comes from mainstream psychologist, Brian Lancaster (Mind, Brain & Human Consciousness 1991). The concept of Multiple-I’s comes to me originally from Gurdjieff & Ouspensky. My own practice has been to make the ramifications of both concepts (I-tags & Multiple-I’s) into a thoroughgoing practical system for looking at the way the ‘self’ works.

But this morning, I woke up thinking you can start anywhere in the past and notice how it’s littered with I-tags into each of which you can associate at will. Some of them are rather nicely held in place by photos. They do not have to be.

What is an I-tag? How does it work?

You put yourself in a place, determine what you see, hear & feel at the time and then notice what comes down the years with whatever it is about your self that has a label (or ‘tag’) attached to it. It’s all still there down in my gut somewhere, somatically marked. The tags are automatic – not something we are in charge of at the time.

After writing thus far, Pausing-for-thought-I looked up at the walls of my ‘workroom’ and noticed the man in the signal box: the perfect metaphor for switching around amongst I-tags. You can start anywhere you like in the past, associate back into any part of you that’s functioning there, still alive for you, and draw conclusions, tell the story.

As the person in the signal box, you can pull the levers to go to an I-tag back there somewhere; as a person driving the train you may have to pause to figure out the journey.

I look at the two early photos of the Laughing Boy – he’s very jovial and that persists: I laugh at the world in spite of all; sometimes people laugh with me; it was so easy for me to identify much later with Sartre’s notion of Absurdity, the fundamental pointlessness of it all – I think it’s already there in the war years when there was a mild feeling of impermanence; going back there down the time-line, it surprises me that I didn’t feel more threatened: doodlebugs (flying bombs) frequently passed over our house; they made a grinding noise that I can still, for a party trick, demonstrate at the back of my throat. When the noise stopped you knew that the bomb was coming down; it sometimes stopped right overhead and that was OK because you also knew it would swoop round and explode elsewhere. Nevertheless, my home seemed secure – there’s an I-tag that suggests that I’ve always felt very secure in myself. But I do also have a strong metaphysical Feeling-of-impermanence-I-tag. The two co-exist quite comfortably together.

The Laughing Boy photos are good reminders of what can also come packaged with an I-tag – the sensation of place, the aura: in these two photos, my father’s garden and the seashore – key anchors of my existence, places where I’ve always felt most at home, my own gardens, of which I’ve created six in the UK (Basingstoke in Hampshire, Pudsey in Yorkshire, Luton & Flitwick in Bedfordshire, Terrington St John in Norfolk & Sutton Bridge in Lincolnshire) from a good honest flat mud start, always with the sensation of manipulating the planet, and the gardens of other people, at the Alhambra, at Versailles; local seashores, Eastbourne & Boscombe, & further afield, Essaouira (Morocco), Valparaiso (Chile) and all those bays & cliffs merely glimpsed from some roadway or other or from the sky high up. Garden-I-tags, Seaside-I-tags, Gardening-as-manipulating-the-planet-I-tag…

There’s myself alone on a beach. Always alone but never ever lonely, always able to commune with other parts of myself – I think that’s what it was. I-tag that goes with never really needing other people. Self-centred? Centred on self, certainly, which is where I perhaps think everybody should be for the sake of civilisation. We are all too much together. Talking too much – getting into arguments, spending trillions on armaments ready for the next episode of reciprocal destruction.

On a wooden horse with my sister… I think I can remember the very moment itself; I might have commandeered the horse from her… Being-bossy-I. But now the photo has an overwhelming sadness for me. The deep unfathomable sadness of existence (strong I-tag for me): even then my sister was harbouring the dreadful disease which. sixty years later rendered her unable to move or feed herself, requiring constant help from institutional carers.

Myself alone, after my sister died, in the garden where I had never expected her to be. I think maybe the sadness of things is all-pervading; it’s where I start from, only gradually and with an effort gathering the things that shine for me, the music, the open skies, intolerable stars, landfalls, rockgardens, summer houses, the sea, silver birches, the sound of the wind in the summer pines, writing, warm smiles, accumulating…

I-tags exist for all time; you can re-arrange them, reinterpret them, keep on going back to them, set them in order, try to expunge them but they always form a part of your mental substructure even when you forget them temporarily. In all of them, in spite of the people I have known and cherished, I remain alone, on the outside.

I-tags Come Back to You from the Past

I-tag: coming upon the golden beach at Bettyhill for the first time (1992?)
I-tag: cycling from Weymouth to Bridport along the coast in the dark – the sound of the sea (1975?)
I-tag: arriving at Land’s End
I-tag: cycling down to Worthing

Transport-I-tag: 213 bus: Elaine – my Beatrice after Paula Davis, Jill, Valerie…
Memorial-I-tag: The End of the War August 45 – standing in my father’s garden wondering how things would be different…

Always wondering how things would be/could be different. A very strong I-tag…

Paula Davis had gone off with her family to Holland without saying goodbye!

Dancing-I-tag: Maureen scorned me for not being able to dance; she wanted me to do the ‘right steps’; Doing-the-right-thing-I has never been one of my strong behavioural characteristics. Seven years after I last saw her I found I could fling myself around to the music in my very own way… Pat Mason will confirm this particular ‘I’ of mine – having seen it in action!

Polarity-responding-I-tag: A very powerful tag, well & truly knotted to me…

The relationship began in February 1954 and ended finally in February 1958. The Maureen-I-tag has dogged me all my life: it has dangled on all my relationships with women, near & far – it’s mostly been about never knowing where you are. It’s a matter of False Imagination because it’s always the case that you know exactly where you are: just here, being you right now… But I didn’t know that then. 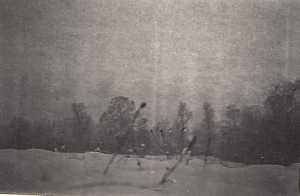 This was the field where we spent many afternoons and evenings – in the grounds of Worcester Park House which had been burnt down long ago. We never went there in the snow; I took this photo the other side of Xmas 1958 after we’d finished.

I think I might have inked in the beard! It was the first adventure after, as I thought, ridding myself of the memory of Maureen! On the reverse of the photo are a couple of lines from Wordsworth whom I was studying for A Level on a part-time basis:-

…summer, when we were young;
Sweet childish days that were as long
As twenty days are now…

What’s your story in I-tags and Multiple-I’s? What difference does it make to analyse things this way? What extra control does it offer?