There’s something about the preservation of old notebooks…

I wonder what’s to be gained from keeping a notebook?

My friend Paul Hickey prompted me to hunt through some old notebooks to find a picture I remember preserving there; it’s a page from a book I used to read my kids in the 1960’s ‒ a 1930’s depiction of a street by St Paul’s I once knew very well. There’s a nice eerie emptiness about it. The building will have been destroyed in the blitz. The picture feels to me to depict a vanished world, a kind of stillness I wish were possible now instead of this brash, loud-mouthed and stupid New World. 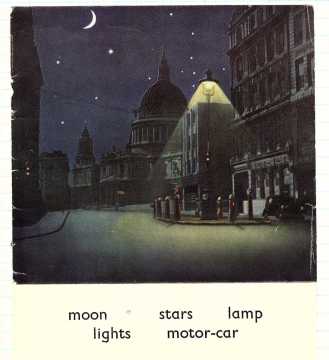 On the opposite page in the notebook there’s a fanciful poem I wrote (1971) when I carefully preserved the page from a child’s reader.

I am not of this time

‒ I should have died fifty years ago;
some fault there was in my birth-time: this scene
from a child’s picture book convinces me (though
there may have been several other indications)

I am content with dingy inefficient lighting;
with incredibly slow box-shape cars;
with stars and moon that never seem to move;
with steam trains winding down inefficient sidelines
(Reading to Redhill under Box Hill for example)
‒ an empty railway platform at Adlestrop…

and you might have lived in Ancient Greece
listening to Pericles            wandered in a green grove
disguised as a boy talking with Socrates;
our paths would not have crossed
unless some transparent timeslip
had so confused the lines of time
as to have sent us cycling down the same
Edwardian lanes to a cream tea
in a Cotswold village around the end
of the first decade of the century

With all the world in an empty turmoil on a Summer Sunday morning in 2016, I turn the pages of the notebook haphazardly. Rambling back there, 45 years ago, I enjoy the feeling of escape. Talking of escape… 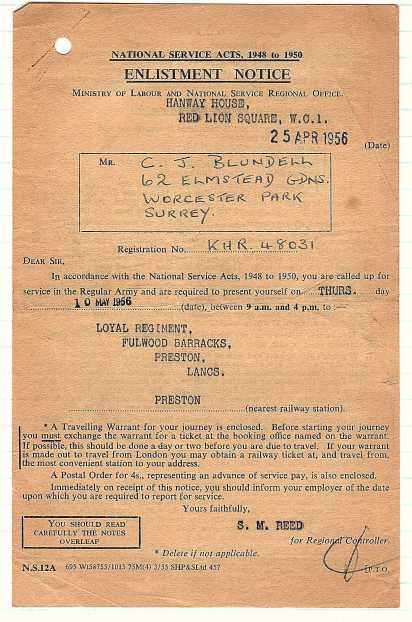 Stuck on another page, here’s my National Service Enlistment Notice! What memories! I suppose that many young lads 60 years ago might have regarded the experience of National Service not as an escape but as imprisonment. Not I! It was a significant turning point in my life; it’s only relatively recently that I’ve come to appreciate how much of a turning point it really was. The whole experience converted me to pacifism for a start. Detached suddenly from life in a London suburb, I entered this remote bubble in time as I enter it as a different bubble from a different age now; its curious events are still lively within me. How easy it is to make all the past live again!

Here’s the poem on the opposite page in my notebook:-

because I lacked conscientiousness

Commander Crabb was dead ‒ the newspapers
contained inquests on the event;
I didn’t know what to say to my father
who took my departure very seriously
having a sort of pride in his unappreciative son:
I wondered if he too was thinking of that earlier time

I was in a state of dream; my train-reading
was HGWells’ Short History of the World ‒
it seemed relevant… seemed to place
my little shattered heroism in a short perspective

The reference to Commander Crabb is interesting. He was a British Royal Navy frogman and MI6 diver who vanished during a reconnaissance mission around a Soviet cruiser berthed at Portsmouth. He was presumed dead on 19th April 1956.

There were various speculations as to the reasons for his disappearance: that he’d been killed by some secret Soviet underwater weapon; that he had been captured and imprisoned in Lefortovo prison with prison number 147, that he had been brainwashed to work for the Soviet Union to train their frogman teams; that he had defected and became a commander in the Soviet Navy; that he was in the Soviet Special Task Underwater Operational Command in the Black Sea Fleet; or that MI6 had asked him to defect so he could become a double agent.

Did his image (my awareness of it in 1971) appear in the poem as an ironical possible direction for my army career? Now it simply reminds me that people appear and disappear, fading from the collective memory ‒ as though they had never existed though at the time speculation was all the rage and their being was firmly planted in the imagination. Thus the media (who really couldn’t care less) stir things in the False Imagination. What Gurdjieff calls ‘The News of the Day’…

…and I was three years into teaching. Here’s a rather strange poem that starts with something a kid said to me as a protest but goes off into what seem now like random ruminations. Perhaps I was just ‘writing everything down’ as an ironic response. Now I’m very glad I wrote everything down!

why do we have to write everything down?
why can’t we just learn?
OVERLAP WITH what Auden said:
how do I know what I mean
till I see what I’ve written?

the best ruse is offhandedness;
head off compulsive noises meant
to fill the gap between generations

CLOCK continues as it has since 1918
when he finished the war;
the old men of the tribe ‒
how much do they know?
they effect to know so much ‒
they fill the gap with rage 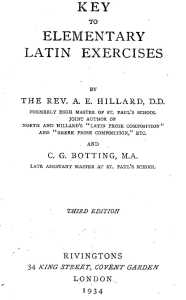 At Kingston Grammar School, for homework. we used to have to translate little sentences from Hillard & Botting. They often concerned an odd figure ‘Cotta’; we had no idea who or what he was ‒ during their eccentric, planless, lessons the eccentric masters made no attempt to tell us so that the sentences we struggled with remained totally abstract & remote. Cotta dux fuit copiarum Romanarum.

Now, by employing the amazing services of Wikipedia, sixty years after it might have been of real interest, I now remedy the lack in my adolescent education. It seems that:-

Lucius Aurunculeius Cotta (died 54 BC) was an officer in the Gallic army of Gaius Julius Caesar. The little we know of Cotta is found in Book V of Caesar’s De Bello Gallico. In 54 BC, when Caesar returned from his second expedition to Britain, he found food in short supply so he distributed his eight legions amongst a larger number of Gallic states from which to draw sustenance during the winter. To the eighth legion, which had recently been raised from across the Po he added another five cohorts. In command of this legion and the other cohorts, he put Quintus Titurius Sabinus and Lucius Aurunculeius Cotta. These two were appointed Legati (Lieutenant-Generals)…

The troops of Sabinus and Cotta were sent by Caesar into the country of the Eburones, in Belgica, most of which lies between the Meuse and the Rhine where they set up Fort Aduatuca in which to winter. The Eburones tribe was under the rule of Ambiorix and Catuvolcus. These two, instigated by the Treveri, collected their men and after a fortnight, fell on a detachment of Romans who were collecting wood. The marauding Eburones went on to assault the Roman Fort. The Roman infantry mounted the ramparts and despatched a squadron of Spanish horse which, falling on the flank of the enemy, routed them in that engagement… Caesar [later] notes that Sabinus lost his mind, running from cohort to cohort and issuing ineffectual orders. Cotta, by contrast, kept calm and did his duty as a commander, in action his duty as a soldier…

What a splendid man was Cotta as compared with the feeble Sabinus lost in history! Cotta, the dynamic, devoted to the airy abstraction Duty. And all this was kept secret from us…

under the summer apple tree of youth:
Cotta an athletic guy
leaping from exercise to exercise
in Hillard & Rotting
with his death defying exploits

the Belgians love their country
Belgae patriam amant ‒
how my memory serves me ‒
the Belgians attacked Cotta (hoorah!)

and who will report their victory?
one difficult to decline or conjugate:
survival of indiscriminate napalming
of Highway 13            limitless defoliation;
what isn’t destroyed in a VC offensive
gets laid waste in a counter-attack
neat & tidy ‒ but how do you
define ‘victory’ ‒ who reported
the victories of Cotta? 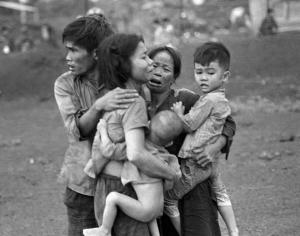 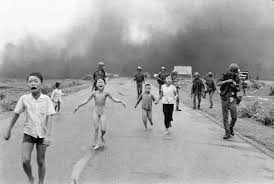 There is a yard or so of notebooks on the shelf behind me… They mean a great deal to me… Why?
What do they mean?

Why do I keep a notebook as a matter of habit? I suppose I had always intended that they would form the basis of future writing.