We are not born ‘free’ to think anything we like; there’s a brain-scrubbing process that starts the moment we are born; well-meaning parents induct us into their thinking about how things should be; they have already been inducted by their education, by their ‘politico-religious’ indoctrination. The pressure is on. How is it that some people can see this obvious truth when others find it outrageous? Does it suit some people to have it like this while others adopt a subservient position? Probably…

How do I think and how have I come to think the way I do? You are encouraged to ask this question of yourself. Freedom to think is an hard acquired characteristic.

The Influence of Others

One important person who contributed to how I think now will never know what influence he had. It was just five years of minimal contact sixty years ago that did it for me, more specifically just a short visit to his house one winter evening.

John Hayes, with your whimsical smile & red and green striped tie—the colours of Walworth House, Kingston Grammar School—I celebrate you wherever you are now, whatever you have done with your life since I last saw you sixty years ago. You were the very pattern of what it is to be learned; offering me the gift of a mental model that delved and foraged for learning by way of thinking; this was my hypothesis anyway. Top of the class every term, every year, in every subject for five years—well, I think there were a few lapses of concentration but not many.

I had no sense of envy nor did I wish to compete though there’s something in the back of my mind that suggests that there were some who did compete. Competition has never worked as motivation for me; I do things because it seems important to me to do them without particularly noticing what anybody else is doing.

Those years, living in fear of most of the teachers, I thanked my lucky stars if I came somewhere between 10th and 20th in any subject and managed not to get relegated to a lesser form where the savages existed who drove the French teacher to drink. To come 15th (out of 27) seemed like a comfortable place to be; I felt justified in being on the planet with a score-line like that. It was not a matter of aiming at anything; just keep the effort in balance either way, noting when I went off course and doing a bit more of something to put things right—it wasn’t even this really. When I take myself back to those years, as I often do, I know that I never had a purchase on anything very much; I just did my bit, never setting myself to overlearn anything, hoping for the best—that things would turn out all right in the end.

Except for the writing of English essays… There somehow I picked up the idea of modelling on real essayists. Nobody suggested I do this. I just did it. Why? And I read Moby Dick…

The tenth book I bought (May 1951—still in my library now—3325 books later) was The Essays of Elia. Either this year or the next, because the classrooms were being decorated we had to lug home a lot of books which included collections of essays. I remember the sunny summer evening as though it were yesterday, as they say. That holiday I read George Bourne (Sturt) & Chesterton & Belloc for myself. Rather oddly, the books were never referred to by the teachers during all the following year. On a school trip to Paris at Easter 1953 I took Richard Jefferies’ The Story of My Heart and absorbed it for the first time and I began to read his nature essays soon after. So it was that in the fourth year at school (1952/53) I pleased the teacher we called we called ‘Crippo’ by writing imitations of standard essayists… Nobody put me up to this nor did they ask me how I did it. Crippo’s pleasure, of course, reinforced my predilection.

I suppose my intellectual life proper began here—focus, unfocus, constrict/dilate, model, think about, get into the spirit or essence of how others do something and then just do it yourself. Music, poetry, painting, essay-writing—same process. Self-generated endeavour.

But John Hayes exists still in my mind as a model of the Absolutely Unattainable Complete Mastery of Learning. How did he do it? The seemingly effortless acquisition of Euclid, Xenophon, Greek irregular verbs, historical ins and outs. I imagine, going back more than half a century, that he was able to climb into knowledge, the knowing of things, and identify himself entirely with whatever had to be learned so that in the June exams reproduction was for him just a question of reading the book of his mind. Unruffled, unrufflable, somehow just doing it.

At school, I was not sufficiently friendly with John Hayes to be able to investigate how he did it and was not therefore able to recreate for myself the workings of his learning process by direct observation but I suppose that I came to construct it as ‘knowledge-crunching’, a metaphor that I have acquired for myself now: I imagine myself to be a steam-roller flattening things into shape though they still get up and leap around after I’ve driven over them. (What metaphor do you have for yourself as a learner?)

I missed the opportunity to be ‘friends’ with John Hayes. I’ve hunted for him on the Web but as far as I can make out he doesn’t figure there so I can’t befriend him even at this late stage in the game. I was invited to his house one evening in late Autumn 1952 or 1953—I expect I could find a reference to the exact date in my voluminous diaries from then. The atmosphere was unfamiliar to me: his father, unusually tall, actually spoke to both of us as though we were adults; a novel experience for me. ‘Bookish’ is the only word I can attach to the short time we were together that evening. I can imagine his parents, maybe despairing a little over his lack of friends (you found it difficult to associate with somebody so ‘brainy’) , asking him if there wasn’t somebody he’d like to bring home to tea. I hadn’t realised that this was the intention and I soon made my excuses and left. What an awful missed opportunity! One of those occasions where you’d like to go back in a time machine and do a rerun… But how ‘useless to fill the heart with bubbles’ (Richard Jefferies)…

Half way up the road to Coombe Hill from where John Hayes lived, unknown to me, JGBennett had his being; I always felt that the area was somehow sacred. Now it’s a gated housing estate for the bloated rich.

I always expected to hear about John Hayes as famous thinker, philosopher, linguist. But he never seems to have hit headlines of any kind. Any more than fellow class-mate Brian Gidney did who I always thought would play cricket for England.

John Hayes was no good at sport; he had a little quiet sense of humour, notions of order, a certain stillness.

In Intellectual Character, Ron Ritchhart suggests that before embarking on a reading of his book, the reader might pause to clarify their own thoughts about the dispositions that support good & effective thinking—to provide herself with an appropriate mental set. What are the characteristics & general attitudes that a ‘good thinker’ possesses? A disposition directs strategic abilities & activates existing cognitive structures to render them capable of taking on the new. Dispositions issue directly into behaviour. This should have some bearing on the original question: How do you think and how have you come to think the way you do?

So, Being a Dutiful Reader, I Made My List

A ‘good thinker’, by which I mean an intellect, one who can consistently put two and two together in a thoughtful way, has at the back of the mind (capable of being easily brought to the front when needed) some Organising Principle (acquired who knows how?), a way of working systematically, a mental set both comprehensive and flexible, constantly renewable… A ‘good thinker’ can focus in and out at will, first on detail and then on structure then back to detail. A ‘good thinker’ displays persistence and attack—not at all a military operation, more like throwing oneself into a dance—Gurdjieff’s Movements would be good—or deliberate play, playfulness. A ballet, musical cadences, focussing on main themes & their endless variation, joining up the dots and then going with the flow. A ‘good thinker’, an intellect, marshals the Vast Scope of Things—in that summer of 1952 or 53, I noticed that Carlyle in his essays used capital letters thus.  The Glass Bead Game is the archetype: your ‘good thinker’ is able to make connections where none previously existed, relating things from different fields, finding parallels for the sheer joy of it. So the ‘good thinker’ goes in and out of the trance of learning, the trance of thinking, intense then relaxing. Learning/thinking is about idea-crunching. Ultimately a Good Thinker is super-aware (without being self-conscious) of how thinking is proceeding. The Good Thinker, the Intellectual is often to be found in Metacognition, thinking about thinking about learning, able to tolerate ambiguity, endlessly avoiding completion, never wanting an end to the journeying, always converting Knowledge from inert ciphers into something one can call one’s own possession (ANWhitehead)

Having made this list I discovered that the book itself did not add much to what I had written for myself: Ritchhart’s own rather disappointing list boils down to Creativity, Reflection and Criticality, a set of lifeless abstractions.

But Ritchhart quotes Ellen Langer on Mindfulness—an open and creative state where you are able to generate new categories, draw meaningful distinctions, consider multiple perspectives and make yourself totally open to novelty.

He also quotes Winne (1995) whose ideas I would arrange thus:- 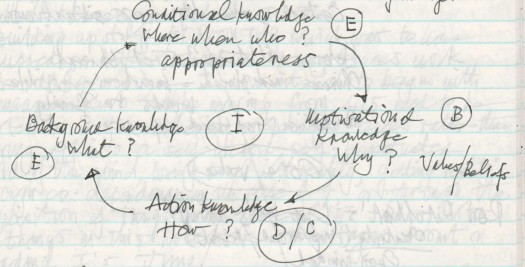 E=Environment, B=Belief & Values, D=Doings (or behaviour), C=Capability and I=Identity—the emergent property from the system depicted here. Run round the ‘Logical Levels’ yourself and notice what emerges at the centre!

What I call an ‘Organising Principle’, Ritchhart usefully calls a ‘Red Thread’. The Hebrew word for ‘theme’ is Red Thread; the Chinese Red Thread is about a new born’s bonds to existence; in Buddhism Red Thread = passion. (What’s your Red Thread?)

I wonder if John Hayes had a kind of Metacognition? Did he know what he was doing? Was his unusually tall father into cognitive theory such as it might have been in those days?  Dewey, William James, Whorf? I will never know but I am very glad to have had John Hayes in my life if ever so briefly as a great model of a True Thinking Being whose processes I have had to imagine in order to attempt to be like him. To come to be like myself.

My great regret is that I didn’t stay to tea that evening as I now think I had been expected to do.

2 thoughts on “What do We Think and How Do We Come to Think Whatever We Think We Think? (R7)”